AOBiome has identified significant therapeutic opportunities caused by the adverse impact of the modern environment on human physiology. The human body relies on a system of multiple microorganisms, chemistries, and pathways which have shaped the evolution of the human immune system (all living species) over millions of years.  A functioning microbiome is essential to human health. When these microorganisms are imbalanced, or dysbiotic, the human body can be more susceptible to disease or faulty immune response.  Diseases, too numerous to count, are recent additions to the human conditions.  We did not evolve to be itchy or blotchy so to speak.  The reintroduction of AOB’s helps tamper these inappropriate immune responses numerous in ways.

AOB, whose sole source of energy is ammonia, play a critical role in the nitrogen cycle. In the presence of oxygen, AOB consume ammonia and produce nitric oxide, or NO, and nitrite (see Figure 1 above).  NO is a key signaling molecule integral to the circulatory system, the central nervous system and systemic response in the human body and is involved across numerous biological systems. NO was proclaimed the “Molecule of the Year” by the journal Science and the 1998 Nobel Prize in Physiology of Medicine was awarded for discovering NO’s role as a cardiovascular signaling molecule and is a well-documented vasodilator with anti-inflammatory properties. AOB also modulates nitrite.

Most importantly, for drug development AOB down regulates several cytokines associated with immune response.  IL-4, IL-5, IL-13, and IL-31 have all been shown to be reduced in pre-clinical work .  These are important markers of Th2 response which is associated with Atopic Disease and Pruritus among other immune related diseases.

The metabolism of ammonia by AOB also lowers local pH levels, and due to its unique metabolic activity, AOB has both first order and second order effects on the human body, including (i) rearrangement of the microbiome, including an observed local reduction in known pathogenic bacteria, (ii) reduction in local pH, and (iii) production of known anti-inflammatory and vasodilatory compounds. Although microbiomes are often difficult to characterize given the transient nature of bacteria, we have shown that the presence of AOB is correlated with a reduction in populations of bacteria that are commonly associated with disease including Staph.aureus and P.acnes, which are associated with eczema and acne, respectively. 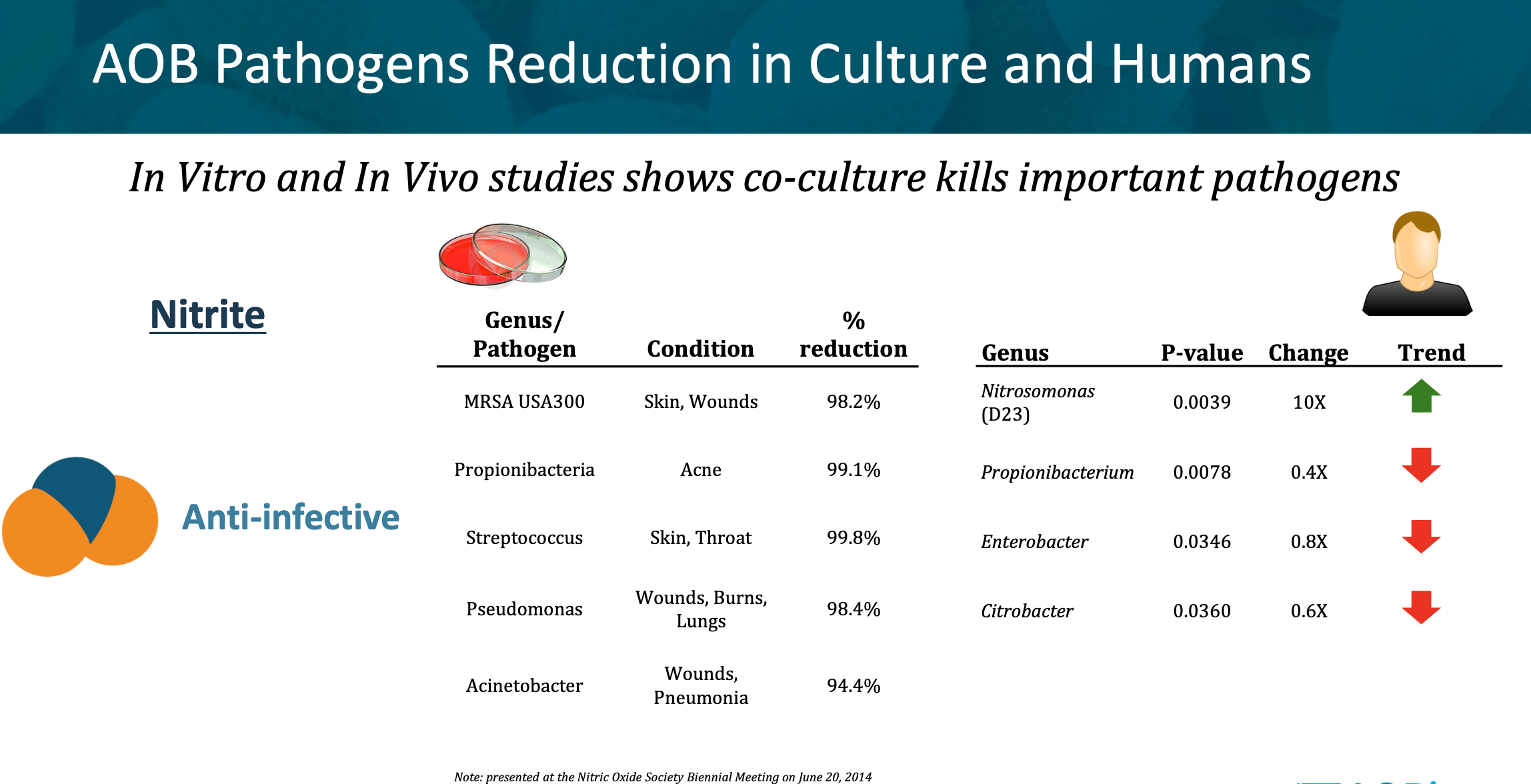 AOB’s anti-inflammatory and pH-lowering properties, and its ability to reduce levels of pathogenic bacteria, coupled with our earlier anecdotal feedback from the Cosmetic Product, led us to undertake our clinical.  AOBiome is using the same active ingredient, B244, a live single strain of Nitrosomonas eutropha, in different potencies and formulations tailored to each of our clinical trials, and we initially targeted inflammatory conditions that are not well served by current therapies either due to lack of efficacy or intolerable side effects. In all of our clinical studies, we have observed a very favorable tolerability profile, with no signs of hypersensitivity reactions, inflammatory reactions, localized infections, bacteremia or sepsis or any serious adverse events.